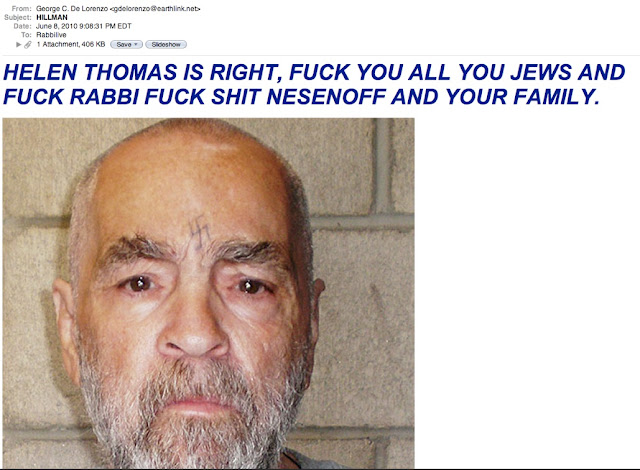 Make sure to view this website: it is quite shocking.

Shown here is Rabbi David Nesenoff, who shot video of Helen Thomas criticizing Israel in May. (FNC)
The New York rabbi who videotaped veteran White House correspondent Helen Thomas telling Jews to "get the hell out of Palestine" says he has received numerous death threats and thousands of pieces of hate mail in the days since Thomas' abrupt retirement.
Rabbi David Nesenoff said he is facing an "overload" of threatening e-mails calling for a renewed Holocaust and targeting his family — a barrage of hate he said he planned to report to the police on Wednesday.
"This ticker tape keeps coming in," Nesenoff told FoxNews.com. "We got one specific one saying, 'We're going to kill the Jews; watch your back.'"
Nesenoff said he was shocked not only by Thomas' original remarks — which he called anti-Semitic — but by the wave of insults and threats he has received since his videotape brought about her public shaming and the end of her 50-year career at the White House.
"This is something that I thought was a couple of people here or there, [but] it's mainstream and it's frightening," the Long Island rabbi said. "[Thomas] is just a little cherry on top of this huge, huge sundae of hate in America."
Nesenoff approached Thomas with a camera on May 27 following a celebration of Jewish heritage at the White House. Asked for a comment on Israel, Thomas called Jews occupiers and said they should "go home" to Germany, Poland and the U.S.
White House Press Secretary Robert Gibbs called her remarks "offensive and reprehensible" on Monday, and her employer, Hearst Corporation, sent out a notice announcing that the longtime dean of the Washington press corps was retiring "effective immediately."
Thomas apologized for her remarks last week after the video surfaced online and was posted to several prominent blogs.
"I deeply regret my comments," she said in a statement, claiming they "do not reflect my heartfelt belief that peace will come to the Middle East only when all parties recognize the need for mutual respect and tolerance."
But even as Thomas backed off from her remarks, e-mailers have continued to assail Nesenoff, who has begun posting dozens of malicious letters and YouTube comments on his website, RabbiLive.com.
"We received a lot of positive reaction, beautiful letters … from all over the United States," he said, but they have been outweighed by the attacks that have flooded in.

Article contributed by Jack.
Posted by DS at 10:04 AM

Labels: Antisemitism in the US

I remember warning you over a year ago, maybe two, about the rising tide of anti-semitism in the US and that you should urge all your family, friends, and acquaintances to rapidly prepare to leave the US. I recommended as the first step to purchase residential real estate. In addition to being a plave to live, it will also be a great investment because Israeli real estate is going to explode in value as more and more Jews leave their countries of birth. I remember I also predicted currency controls would be instituted and still do. The Treasury can mandate that through a Presidential Executive Order, so it can be a fait accompli in the blink of an eye. When they come into force, American Jews will be trapped and their opportunity to have take refuge in Israel without being a homeless wanderer will be gone forever. I know that you know this is serious business, so the warning goes out again.

The Leftist Jews in this country think they'll be safe in Obama's Amerika, but they're wrong and will fall into the trap they have laid for hard working Americans whose hope for the future is gone. I'm not wishing harm on them, but the Lord's universal law of sowing and reaping will not be abrogated for them.

Helen is short for hellenism, isn't it?

Others are repeating what I said. This THIS writer see the article here first?