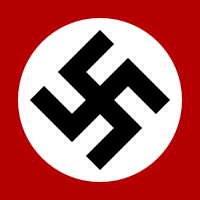 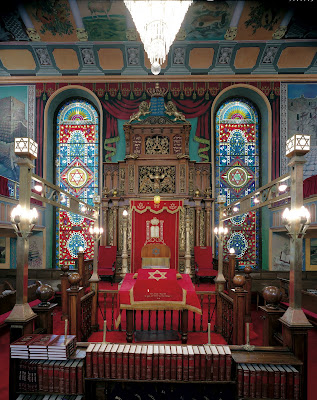 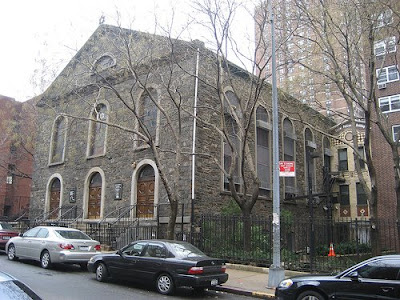 It never ceases to amaze me that JEWS in America, even an ASSEMBLYMAN, not some naive, innocent Chassid, REFUSE TO ADMIT ANTISEMITISM WHEN IT IS BEING SHOVED IN THEIR FACE.

They have been so infected by the UNIVERSALIST BUG that they cannot detect when HATRED HAS ONE SPECIFIC, AND ONE SPECIFIC AIM ONLY: THE JEWS. AM YISRAEL.

Why are they so afraid to face the truth? Why do they persist in playing the ostrich? Because it would disassemble all their CAREFULLY BUILT MENTAL CONSTRUCT OF THE GOLDENE MEDINE, " THE NEW JERUSALEM" LEHAVDIL, WHERE NO WRONG CAN EVER OCCUR??

TIME TO WAKE UP, FOLKS: the game has changed. This is NOT the United States of America that you knew, this is WEIMAR GERMANY, you better wake up before it is too late.

What will it take to convince you that it is time to pack up and leave???

Police are investigating after a swastika was found yesterday painted on the inside of a Manhattan synagogue.

A swastika and a derogatory word were painted on an inside door of the Bialystoker Shul on East Broadway. A smoke bomb was set off, as well.

State Assembly Speaker Sheldon Silver has attended the synagogue since he was a child and said he was furious to discover what had happened.

"This is a crime, not against the synagogue; this is a crime against society," said the assemblyman. "When people choose to desecrate a house of worship, it doesn't matter whether it's a church, a synagogue. It is just a despicable act that really should tug at the heartstrings of all of us."

Silver said surveillance cameras nearby may have caught the perpetrators.

American Jews in the average are exact copies of the Weimar Republic suicidal maniacs. NOTHING has changed or will for as long as we tolerate the type of system of "machers", hotel lobby president's table, corrupt and even criminals as leaders.
Just a week or so ago the US Jews... saw a Nazi attacking the Holocaust Museum in Washington to murder people.
NOTHING was learned from that either!
Nothing has changed...
Nothing has been learned...

DS: It turns out there was even MORE to the story: one more Jewish site defaced by a swastika. The culprits: non-white youths.

The teenagers, a 15-year old Asian and a 16-year old black, drew a large swastika on the United Hebrew Center on East Broadway. The two then set off a smoke bomb before heading to the Bialystoker synagogue on Willet Street, where they drew a second swastika and through eggs at the building.

The attacks occurred only a few days after eight Jewish children were injured in Williamsburg, Brooklyn after a resident of a Latino block across the street threw a bottle with dangerous chemicals at them. That attack is not officially categorized as a bias crime, however.

Police plan on charging the Lower East Side vandals with the hate crimes of aggravated harassment, criminal mischief and reckless endangerment.

“This is a desecration of G-d, no matter what your religion,” said New York Assembly Speaker Sheldon Silver, who attends the Bialystoker synagogue. “It is just a despicable act that really should tug at the heartstrings of all of us.”

State Attorney General Andrew Cuomo announced that the Civil Rights Bureau would open an investigation into the crime calling it “outrageous and deeply disturbing.”