Cute... and totally useless. There are OTHER THINGS , though, that the rabbis could do, that HAVE TEETH; A CHEREM ON ALL OUR LEADERS WHO ORGANIZE VIOLENCE AGAINST JEWS HERE; EXPOSING THE TRUTH... IS THIS TOO MUCH TO ASK?? 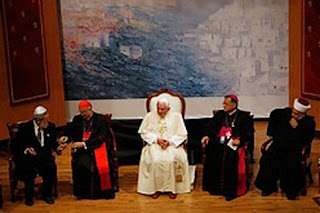 Unfortunately, as Rabbi Dov has told us, MOST RABBIS ARE BRIBED... and then of course, SHEAR YASHUV COHEN IS A BIG INTERFAITH FAN, RUNS TO ROME AND INTERFAITH MEETINGS ALL THE TIME... SO WHY ON EARTH WOULD THEY DO ANYTHING TO ENDANGER THE NWO - AND THEIR SALARIES?

Rabbis Call on Rabbis to Lobby US Gov't

Rabbi Shlomo Amar, who serves as the Rishon LeTzion, Israel's Chief Sephardic Rabbi, is signed on the call, together with some 25 rabbis from all over Israel, both hareidi and religious-Zionist.

Rabbi Shalom Gold, one of the initiators of the letter to his former colleagues – and to the Conference of Presidents of Major American Jewish Organizations – explained how the letter came about. Speaking with Arutz-7's Hebrew newsmagazine, Rabbi Gold said, "This past Sabbath, we were at an Ariel Rabbis convention, together with Haifa's Chief Rabbi She'ar-Yashuv Cohen. I was asked to deliver a short Dvar Torah [lit., word of Torah] during one of the meals, at the end of which I said that it is inconceivable that the Jews of American can build homes wherever they want, while here in our own land, Jews can't build their homes in Beit El, Shilo, Har Homa and elsewhere. I said that the goal of all Arabs is to build a Palestinian state here without any Jewish presence – unlike any other country in the world – and this is what the princes of democracy around the world want to build… The Land of Israel is being degraded, the situation is wretched, and we must speak out and protest."

"After the meal," Rabbi Gold said, "the Rishon Letzion, Rabbi Amar, gave a class, and at the end he turned to me and said, 'Rabbi Gold, you shocked us with your words, and we have to do something about it.'  We set a meeting for after the Sabbath, and he arrived with pen and paper, and began to write, based on what I had said earlier, and that's how the letter came about."

The letter expressed sorrow at the situation currently facing Israel, and calls upon American rabbis to "do their utmost to use their influence with the American administration to remove this terrible and unjust pressure from the government of Israel."

Rabbi Gold is a leader in the Ichud HaRabanim, an organization of former American rabbis in Israel who have been active on behalf of Land of Israel issues over the past several years. The organization worked closely with the late Chief Rabbi Avraham Shapira during the public struggle against the Disengagement.

Asked if he feels the American organizations have been apathetic to Israel's plight, Rabbi Gold said, "I wouldn't say that, but the fact is that most of the Jewish organizations over the past 15 years didn't do what they could have done. They didn't even come out against the expulsion from Gush Katif, even though everyone knew it was a catastrophe."

Many rabbis and rabbinical organization in America have various connections in the government, Rabbi Gold said. "It's not our place to tell them what exactly to do, but we just want them to take whatever action they can to remove this unfair and immoral pressure from off the Israeli government."

Earlier this week, another large group of Israeli rabbis wrote a letter to U.S. President Barack Obama, demanding that he cease pressuring Israel to stop Jewish construction in Jerusalem.


this effort is a bracha l'vatalah and will never bear any fruit... it is the equivalent of putting a square peg thru a round hole... no one on the other end is listening and they have no clout or standing to begin with vis a vis the slime... so what's the use...? the only thing that will work is for all of us to go to open revolt here and there and all around the world... jews rising up and refusing to take this abuse anymore... nik. out...