This just MAKES MY DAY! The Vatican clearly deserved this humiliation, and specially this Chanukah. Hashem is really fighting our battles! 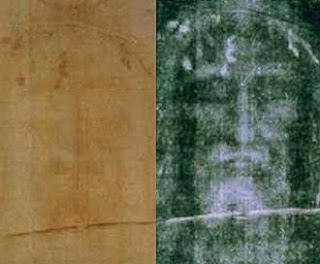 SHROUD OF TURIN - NOT!

(Israelnationalnews.com) The DNA of a man buried near Jerusalem's Old City in the first century Common Era reveals the earliest identifiable case of leprosy, according to researchers from Israel and North America. The burial shroud may also disprove the claim that the Shroud of Turin is from first-century Jerusalem.

The burial cave in which the remains were found, which is known as the Tomb of the Shroud, is located in the lower Hinnom Valley and is part of a first-century C.E. cemetery. The shrouded man, whose bones were dated by radiocarbon methods to 1-50 C.E., did not receive the customary secondary burial in an ossuary (small stone container for bones) common at the time. The entrance to the part of the tomb where this individual was buried was completely sealed with plaster.

The Hebrew University's Prof. Mark Spigelman, one of the leading researchers who studied the molecular evidence from the tomb, believes the isolation was due to the fact that the shrouded man suffered from leprosy and died of tuberculosis. The DNA of both diseases was found in his bones.

The excavation also found a clump of the shrouded man's hair, which had been ritually cut prior to his burial. These are both unique discoveries, as explained by Hebrew University spokespeople, because organic remains are hardly ever preserved in the Jerusalem area owing to high humidity levels in the ground.

The evidence revealed by the remains indicate that tuberculosis and leprosy may have crossed social boundaries in the first-century C.E. Jerusalem. A number of clues - the size of the tomb, its location alongside a High Priest, the type of textiles used as shroud wrappings, and the clean state of the man's hair - suggest that the shrouded individual was a fairly affluent member of society in Jerusalem or a priest himself. Furthermore, according to Prof. Shimon Gibson of Hebrew University, the tomb would have faced directly toward the Jewish Temple of the time.

Disproves Turin Shroud?
This is also the first time fragments of a burial shroud have been found from the time Jesus was alleged to have been active in Jerusalem. The shroud is very different from that of the Shroud of Turin, hitherto claimed to be the one used to wrap the body of Jesus. Unlike the complex weave of the Turin Shroud, the recently discovered shroud is made up of a simple two-way weave, as the textiles historian Dr. Orit Shamir was able to show.

Based on the assumption that this is representative of a typical burial shroud widely used at the time of Jesus, researchers concluded that the Turin Shroud did not originate from Second Temple-era Jerusalem.

Further details of the discovery are published in the December 16, 2009, issue of PloS ONE Journal for peer-reviewed scientific and medical research.