Fwd: not only can it happen America, it is happening 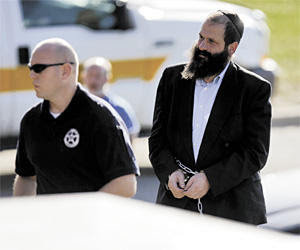 Thursday evening, after sitting through an hour-long recitation of the jury's verdicts in Sioux Falls, Iowa, Shalom Mordechai Rubashkin was detained pending a bail hearing at the insistence of Peter Deegan.

If that were not shocking enough, the ordeal he was subsequently put through is positively offensive, contemptible, and a black mark on the justice system of the United States.

Reb Shalom Mordechai was taken by US Marshalls to South Dakota State penitentiary in Sioux Falls pending transfer to Iowa. He was not allowed to make a phone call to inform his lawyers or his family of his location.

One of the Marshalls, upon learning of this, was nice enough to call the family. They would have otherwise not known where he was.

As part of the entry process into the jail, Reb Shalom Mordechai was asked to disrobe and change into the prison uniform. He complied, but stopped short of removing his tzitzis and yarmulka, explaining that, as a religious Jew, he was required to wear these garments at all times, that it is permitted under federal law, and that he would not take them off.

The staff, after asking their superiors, were told that they would not allow him to wear his religious clothing.

At this point, six burly, intimidating prison guards entered with riot shields. They took a video of this interaction. He was told by the warden at the prison that he would be allowed to wear his yarmulka, but not his tzitzis.

Reb Shalom Mordechai explained that although he had no interest in making trouble, he would not remove his tzitzis for religious reasons and his religion does not allow him to walk around without tzitzis.

The prison staff belligerently insisted that he nevertheless remove them or they would be removed by force and he would be placed in a disciplinary area alone.

Reb Shalom Mordechai explained that he was not fighting with them, but he would not remove them himself. He was not trying to give them a hard time, but he was insisting on his religious rights. He also took the opportunity to inform them of his other religious needs, namely, the tallis and tefillin required for davening Shacharis, before which he would be unable to eat.

They responded by yelling at him for threatening a hunger strike. "Do you know where you are?!" they shouted They then removed his tzitzis. He was given only a thin sheet to cover himself and they brought a wheelchair to move him, since he had said that he would not be allowed to walk without his tzitzis.

The staff took him to the disciplinary area, where a woman asked him questions from a form, and then disregarded his answers, writing in whatever she wanted to, over his objections.

They left him to sleep with no clothes - only the thin sheet and his yarmulka and another sheet to cover himself.

In the morning, they brought him papers to sign, which he would not do without his lawyers. The US Marshalls arrived to transport him to Iowa, and they confirmed that he was allowed to wear tzitzis, which were then returned to him.

Due to his commitment to strict kashrus, food was purchased by his family that met those standards, but the food was not allowed into the Iowa prison because it wasn't packaged correctly. He did not eat at all from Thursday lunch until Motzoei Shabbos when he was finally given a small bottle of grape juice for Havdalah, a package of rolls, and a pareve matzoh ball soup mix, which he ate cold.

Reb Shalom Mordechai is currently in county jail in Sioux City, which has been a lot more respectful of his rights and religious freedom. The bail hearing has been set for Wednesday, at 9:15 a.m., in Cedar Rapids.

Have a nice day


"When a well-packaged web of lies has been sold gradually to the masses over generations, the truth will seem utterly preposterous and its speaker a raving lunatic." Dresden James.