CROCODILE TEARS: the best revenge will be the day his children turn against him, just as he turned against his people. These things have happened in our history repeatedly. 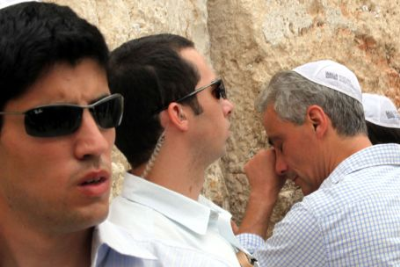 Sivan 14, 5770, 27 May 10 08:59
by Gil Ronen
(Israelnationalnews.com) White House Chief of Staff Rahm Emanuel was photographed as he appeared to shed a tear at the Kotel (Western Wall) Thursday (see photos below).
President Shimon Peres hosted Emanuel with his wife Amy and their children, Zach (13), Ilana (11) and Leah (10) in the Presidential Residence Thursday. Peres gave presents to Emanuel's wife and children and taught Zach, who is in Israel to celebrate his Bar Mitzvah, a lesson about the weekly Torah portion.
Zach received a Kiddush cup and a gold-lined Book of Psalms with a personal dedication, while Amy, Ilana and Leah got small Psalm books with dedications and Presidential Residence pins. 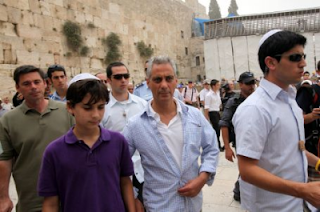 The children told the President that of all the things they did on their visit to Israel, they especially enjoyed flying in a military helicopter and experiencing an Air Force flight simulator at Hatzerim.
After taking the Emanuels on a tour of the Presidential Residence garden, the President held a 90 minute closed door working meeting with Emanuel.
Several dozen activists shouted 'traitor' at Rahm Emanuel Thursday morning when he arrived near the Hurva Synagogue. Activist leader Itamar Ben Gvir Gvir was detained and forcibly removed from the scene by police. They told reporters that a person who thinks the Kotel (Western Wall) should be handed over to Arabs should not be allowed to go to the Kotel.
Emanuel's boss, President Barack Obama, visited the Kotel before his election and planted a note in it, which he released to the press. The visit was one of the elements in Obama's campaign that convinced many Jews he was was not hostile to Israel or to the Jewish people. Emanuel's radical left views on Israel are seen as one of the sources for Obama's pressure on Israel and hostile behavior to PM Netanyahu.
Posted by DS at 11:31 AM

Its really mindnumbing wondering what exactly could be going through his mind.. If he actually is, lying.... And faking the tears. With Peres and the whole thing in itself being a fake display of Jewish piety. Just wow..... Theres no humanly way possible to reconcile his anti- Israeli policies/rhetoric with this emotional display.

Again, i cant help but just be amazed by the thought of what exactly is going on. If hes faking, thats horrible. If hes serious, thats just as confusing.