... And what are Israelis up to? After the gay rush, now it's idolatry in full swing. What's next, Lucifer worship? So are we going to picket Miseshnikov, YES, or NO??? 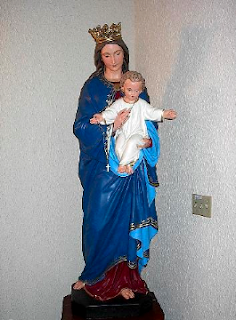 Tue Jan 11, 10:56 am ET
JERUSALEM – Israel is inviting tourists to retrace the footsteps of the Virgin Mary, officials said Tuesday, in the latest campaign to bring Christian pilgrims to the Holy Land.
A new itinerary developed by the Tourism Ministry helps tour operators plan pilgrimages to sites where the mother of Jesus Christ lived and traveled. They include her birthplace near Nazareth in northern Israel, as well as Mary's Spring and the Tomb of the Virgin near Jerusalem.
Tourism officials said Israel has long facilitated pilgrimages for Christians to travel in Jesus' footsteps — spanning from the sites of his crucifixion and resurrection in Jerusalem to the Sea of Galilee, where he is said to have walked on water. Working with Palestinians, Israel also facilitates visits to Bethlehem, the West Bank village of Jesus' birth.
The Virgin Mary itinerary includes holy sites in the West Bank as well, including Bethlehem. Tourism officials said they work closely with the Palestinian on tourism matters, though this itinerary was not specifically coordinated with the Palestinians.
In 2010, 69 percent of Israel's almost 3.5 million tourists were Christians — mostly Catholics. Now Israel is encouraging return visits by those who have already made their first pilgrimage.
Friar Pierbattista Pizzaballa, the Roman Catholic Church's custodian of the Holy Land, said that for the faithful, being able to touch and see biblical sites firsthand is a transformative experience.
"For us Christians, the Holy Land is the physical connection with the life of Jesus," he said. "But we cannot talk about the life of Jesus without talking about his mother, the Holy Virgin."
At the Church of the Visitation in Ein Karem Tuesday, beneath a large mosaic of Mary riding a donkey, tour guide Ein Mor Pnina told visitors they were standing at the site where a pregnant Mary is said to have visited her cousin, Elizabeth.
"We can see all the history of the Holy Land in this monastery," she said before leading visitors into the church's crypt, where painted scenes of Mary and other biblical figures fill every wall.
Lina Haddad, who directs Israel's marketing of religious tourism, said the full-color booklet outlining the Virgin Mary itinerary, released Tuesday in English, will be translated into Spanish, French, Italian, Polish and Portuguese.
Tourism professionals said Christian pilgrimages help Israel both economically and politically, because visitors tend to become supporters of Israel afterward.
Creating new travel products and marketing them specifically to Christians is the surest way to achieve that, said Elisa Leopold Moed, a Jew who founded Travelujah, a social network that promotes Christian tourism to Israel.
"The Christians feel passionate" about the sites so central to their faith, Moed said. "It's burning inside of them."
( MISfitnikov is Minister of Tourism at this time, therefore the buck stops at his door - higher up too, of course, but he is step 1.)
Posted by DS at 10:05 AM