Elul 19, 5770, 29 August 10 03:28
by Hillel Fendel
(Israelnationalnews.com) Over 200 Arab pirate connections to Israel’s main water lines, siphoning off water to PA Arabs who do not pay, have been detached in a joint police-Mekorot action.
Mekorot Water Company workers, under close police protection, have completed an operation disconnecting 230 pirate Arab connections to Israel’s main water lines. The connections siphoned off much-needed water for the benefit of Palestinian Authority Arabs, who thus avoided paying for the commodity.
In addition, the IDF’s Judea Region destroyed several small reservoirs in which stolen water was gathered in the Kiryat Arba-Hevron region.
On yet another front in the war against water thieves, police have begun laying ambushes, making several arrests and confiscating over 85,000 meters (53 miles) of piping used to pipe the stolen H2O to Arab fields and homes.
Infrastructures Minister Uzi Landau, who gave the order to take a stronger hand against the water thefts, expressed his satisfaction with the cooperation among the various bodies. “We plan to continue working to stop all water piracy, which affects the lives of all residents in the region," he added.
Residents of Kiryat Arba and neighboring communities, and Arabs as well, have suffered from lack of water in their faucets on numerous occasions, especially on especially hot days. The army has been frequently forced to deliver water to the towns. It has also been noticed, at the same time, that Arab fields along the roads of Judea appear to be extra green and thriving.
“Water theft is a grave phenomenon,” Landau said, “and it most manifest in Judea and Samaria. We have to deal with it seriously, especially in a country like ours where water is so precious.”
In a related item, the level of the Kinneret (Sea of Galilee), Israel’s main water reservoir, is in the midst of its customary summer drop. It now stands at approximately 213.5 meters below sea level – slightly more than half a meter higher than it was last year at this time. However, it is also a half-meter below the level beyond which authorities strive not to let it drop.


Comment:
We have been publicizing and complaining about this issue for over two years now
Unbelievable... or should I say, BELIEVABLE, knowing Israelis ...
even taking pictures of green fields of the Arabs in Bet-Omar in the midst of severe drought two years ago... 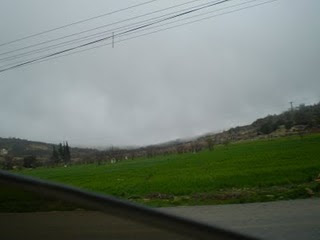 It is nice to know that somebody is finally listening, and realizing what a devastating impact tolerance of this water robbery is having on Jewish life in Israel.
Posted by DS at 9:17 PM