BP Catastrophe Part XIII: the underwater oil plume: it aint' over until it's over! 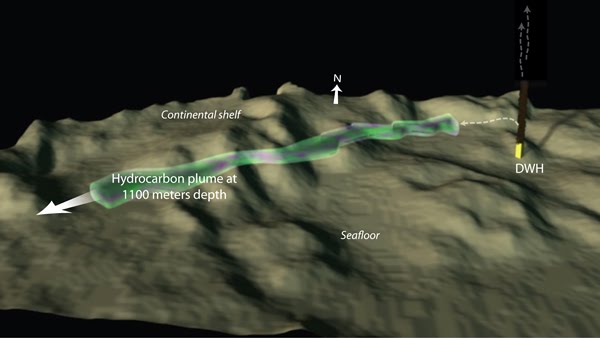 This illustration shows a plume of hydrocarbons emanating from the Deepwater Horizon oil spill. The plume was identified using the autonomous underwater vehicle (AUV) Sentry, instrumented with a TETHYS mass spectrometer. The vehicle made numerous criss-cross penetrations to map the parameters of the 1,100-meter-deep plume. Woods Hole Oceanographic Institution (WHOI) scientists, who conducted the NSF-funded work in June 2010, report the plume they measured was 1.2 miles wide and 650 feet high. WHOI developed and operates Sentry.

And just when things were looking up for the Gulf... a huge underwater oil plume has been discovered.
The hydrocarbon plume/river is 22 miles long, 1.2 miles wide, and 650 feet high. It isn't pure crude, of course; it's more like a mix of oil and water.
Why isn't the oil floating to the top?
Crude is lighter than water, so it usually does... But this spill is different.

Apparently, the cold water and high pressure that exist at these depths are preventing it from coming to the surface. Dispersants may be playing a role as well.
People are calling it a plume, but it looks more like a river to me.
The river of hydrocarbons is currently headed southwest, towards Mexico's coastline. That could cause a nasty international incident in a few months...
Fortunately, scientists say the plume's concentrations of toxic chemicals are dispersing as they travel.
But we're talking about benzene, mercury, and other really nasty chemicals. The full impact of these deep water plumes is not yet understood.
Scientists from WHOI, along with the Coast Guard and other institutions, used an array of high-tech gadgets — including an autonomous unmanned vehicle (AUV) named the Sentry — along with mass spectrometers, to find and track the plume.
Dr. Richard Camilli of WHOI had this to say:

We’ve shown conclusively not only that a plume exists, but also defined its origin and near-field structure.
That certainly runs counter to most of the reports we've seen so far.
Dr. Samantha Joye, a marine science professor at the University of Georgia, said told the NY Times:

The idea that 75 percent of the oil is gone and is of no further concern to the environment is just incorrect.
For now, we don't know if more plumes are lurking out there. The ocean currents at these depths are still somewhat of a mystery, even to scientists who study them for a living.
We can only hope for the best, and be glad that efforts to limit damage from the spill have picked up in recent months.
Just today I talked to a friend who is down in New Orleans, coordinating and working on the cleanup. He told me things have improved dramatically from the chaotic early days.
Thousands of bright folks are working around the clock to clean this one up.
Until next time,
Adam Sharp

Watch and read all the previous articles on BP for the full scoop. Search labels for "BP".
Posted by DS at 1:14 AM