The Beith Din of 71, the 'Sanhedrin', is taking a stand regarding deliberate disarming of Judea and Samaria Jews. Thank you, rabbis! 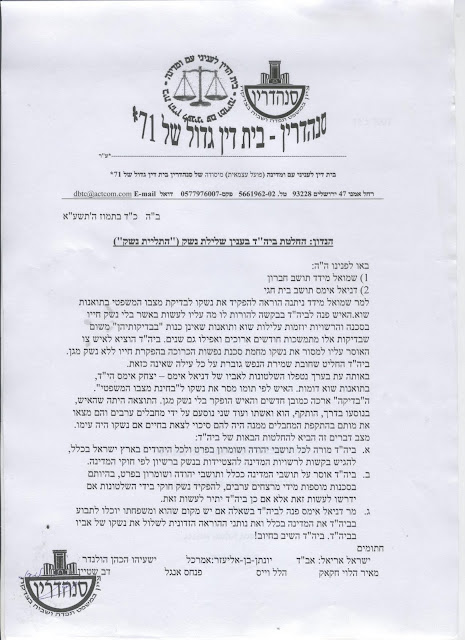 For translation, please use the box in the sidebar, or Google Translate.
And here is my response to this declaration:
Dear Rabbi Stein:
It is very good and courageous that you are telling people to refuse to hand over their weapons: it could put you on "their" black list, if you are not there already. However, how practical, how possible will that be? What will the police's response be to such behavior? Will they attack, even kill, a person who refuses to hand over his or her weapon?
Still, it is wonderful that some rabbis are finally taking action in this matter.
On the other hand, very importantly, your letter fails to mention the DELIBERATE disarming of the settlers. Take Honenu's Zangi, for example ( SHmuel Meidad): He is becoming very much  a thorn in the side of the Supreme Court, the left, etc. So he is on their ELIMINATION list, obviously.( Please review the information which I have repeatedly posted about this matter, last in the post about Rav Lior). There is a very clear plan to eliminate leaders of the settler movement. Both of the people mentioned in your letter fit the picture, and both had their weapons taken under spurious pretexts, and withheld in an apparently negligent manner. Of course there is nothing negligent about it, it is wholly deliberate. The aim? MURDER. Let the Arabs do the dirty work of the police, the Shabak, Peres, Rome, etc. Somebody from the Shabak, or whoever, will tip the Arabs as to the whereabouts of the targeted person, and surprise, surprise, that person will be attacked by Arabs. Oh, those bad Arabs; what horrible terror, etc.
But WHO PLANNED THE TERROR ACT? WHO CONDEMNED THESE PEOPLE TO DEATH? That question needs to be addressed publicly too. I don't know if your Beith Din will have the courage to do so, but unless these questions are openly asked, nothing will change.
At any rate, thank you for a good beginning. Yasher Koach to your Beith Din for their courage to at least do this.
By the way, for years already my family has been refused a weapon for self-defense.

And see in the following post how the exact same scenario is being played out in Arizona, how law-abiding citizens of the opposition, 'good' Americans who refuse the New World Order and corruption, are being targeted for murder by a criminal police chief and his minions.
Shabbat Shalom
DS