Latest developments in Europe: campaign in high gear! I shudder to think what will follow. It seems that for the time being the US IS AFRAID OF A BACKLASH and is AVOIDING ADJUVANTS - but for how long? After all, the WHO is pushing for them!! 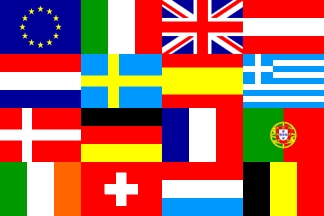 Oct. 21 (Bloomberg) -- The U.K., Germany and Ireland will begin immunizing their residents against swine flu in the next two weeks.
The U.K. kicks off its swine flu vaccination campaign today when it offers the shot to about 2 million health- and social- care workers and hospital patients at high risk of contracting the illness, Chief Medical Officer Liam Donaldson said. Family doctors will begin inoculating as many as 9.5 million other people in priority groups on Oct. 26, he said.
“This is the first pandemic for which we have had vaccine to protect people,” Donaldson said in an e-mailed statement.
More than 399,000 people worldwide have contracted laboratory-confirmed cases of swine flu and more than 4,700 people have died from the illness since it was first identified in Mexico and the U.S. in April, the Geneva-based World Health Organization said on Oct. 16. A total of 228 deaths have been reported in Europe since April, according to the Stockholm-based European Centre for Disease Prevention and Control.
France started immunizing health-care workers against swine flu yesterday. Germany will roll out its vaccine program on Oct. 26 and Ireland on Nov. 2. Spain is expected to start vaccinating in mid-November after regional health officials set a date, according to the Ministry of Health.
The first swine flu vaccines in the U.S. were given to doctors and hospital workers on Oct. 5.
The European Medicines Agency has approved GlaxoSmithKline Plc’s Pandemrix, Novartis AG’s Focetria and Baxter International Inc.’s Celvapan for protection against swine flu in the European Union.
Switzerland, which isn’t part of the EU, has ordered 13 million doses of vaccine, though it hasn’t approved the inoculations yet, said Jean-Louis Zurcher, spokesman for the country’s Federal Office of Public Health.

CHICAGO (Reuters) - The U.S. government awarded $60 million to researchers and companies on Thursday to develop vaccine adjuvants -- substances designed to boost the immune response and can help stretch short vaccine supplies.
"The goal of these awards is to find safe new adjuvants that will boost the effectiveness of vaccines," Dr. Anthony Fauci, director of the National Institute of Allergy and Infectious Diseases, part of the National Institutes of Health, which awarded the grants.
"Adjuvants can be used not only to enhance the immune response to a vaccine and thereby offer better protection but also to extend the vaccine supply if needed, enabling more people to be vaccinated with fewer doses," Fauci said in a statement.
The five-year contracts went to six researchers, including one from Corixa Corp. of Hamilton, Montana, a unit of Britain-based drugmaker GlaxoSmithKline.
Other awards went to researchers at the University of Michigan, the University of California San Diego, the University of Kansas, the University of Washington School of Medicine, and Mount Sinai School of Medicine, New York.
Currently, the only vaccine adjuvant approved for use in the United States is an aluminum mixture known as alum, which is not used in flu vaccines because it does a poor job at boosting the immune response.

Adjuvants are widely used in flu vaccines in Europe, including vaccines made by Glaxo and Novartis.

The World Health Organization promotes the use of adjuvants because they can stretch the short supply of vaccine for H1N1 swine flu vaccine, making more shots available to needy countries.
WHO says the global capacity to make influenza vaccines is about 3 billion doses a year -- not enough to cover the population of 6.8 billion people.
(Reporting by Julie Steenhuysen; Editing by Maggie Fox)

To which the editor of VACTRUTH added:


The WHO, FDA, CDC, NIH, HHS, and proponents of vaccines state that Alum, MF59 and AS03/04 adjuvants already on the market are safe and effective. What is the purpose of replacing something that apparently ‘works’ ?

Such an incredible sad world this is becoming daily. My now deceased brother in law got a rare cancer at a young age in Israel, along with many other kids his age. It baffled the doctors. I am neither baffled or impressed by the absoulute scum that haShem allows to exist and harm His children. The trash live on while the righteous suffer.

Great blog. Hopefully, b'ezrat haShem, you will be posting only good.