So, are we just going to take it, or are we going to fight this? Yes indeed, this is U.S. policy. Could it also be Israeli policy??? Reference: Migron, Gush Katif, etc. Muslim take-over of Jewish Lands, compliments of the Israeli government and the Supreme Court of Israel. 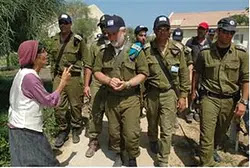 Expulsion of Gush Katif
Police and back-up IDF troops are preparing for the largest expulsion of Jews since Gush Katif, destroyed almost exactly seven years ago, immediately after the Ninth of Av, the day of mourning for the destruction of the First and Second Temples.
The training will be totally superfluous if the government reaches a new agreement with residents of Migron, in Samaria, following the High Court decision Sunday that rejected a compromise to expel dozens of families from the community in three years, that is, after new homes can be built on nearby state land.
A senior officer in the Central Command warned two months ago that planning for the expulsion will cause a deterioration of security on several fronts, although the soldiers would serve as back-up reserves in an expulsion while the police take the front lines.
First of all, the training will take soldiers away from combat operations, particularly near Gaza and on the Egyptian and Lebanese borders. The emphasis on Gush Katif expulsion training was widely blamed for the IDF's lack of preparedness in the Second Lebanon War.
Secondly, the destruction of another Jewish community will diminish the strength of  Jewish presence in Samaria in Area C, the area that is controlled by Israel and contains all the Jewish communities in the region. This may encourage the Palestinian Authority, backed by Peace Now, to become the de facto authority in areas where Jews live, although only 4% of Palestinian Arabs live in Area C.
The IDF officer also warned that another expulsion could find the IDF having to deal with severe “price tag” operations against Arabs in protest of the court orders and government policy, unless the Netanyahu administration decides to back a new bill that would pave the way for Migron to remain in its present location.
Synopsis of Migron story:
Migron was built with government help on land whose ownership is unclear, except for the fact that it is not state land. Peace Now launched a lawsuit before the Supreme Court aimed at destroying the community. Since only Magistrate's Courts adjudicate land ownership in Israel, the question of who owned the land was not decided in the Supreme Court, although it seems that some of it was given by King Hussein to Jordanians who never laid claim to it. Jordan was an occupying power in Judea and Samaria from 1949-1967.
The compromise, worked out by MK Benny Begin (Likud) with much difficulty, would have had the residents move to a small, nearby area that is uncontested state land, and have the present Migron houses used by the government for other purposes.
A compromise moving them to a large, new suburb to be built near the existing community of Adam on state land was worked out by the Judea and Samaria Council two years ago, but the residents rejected it, still hoping to save the existing community.
In both compromises, the residents were to remain in Migron until the alternate houses were built. The compromise was agreed to by both government and residents in order to avoid both the violence that accompanied the destruction of the houses at Amona in 2006 and the bitter split in the nation that occurred due to the expulsion from the Katif Bloc in 2005.
The courts, however, made saving Migron in its present location an impossibility and may now have made the new compromise unachievable.