No morals, no brains, and no divine inspiration: see the faces, and remember.

School has been cancelled in nearly all towns in southern Israel, in the wake of the ongoing rocket attacks over the weekend. All schools within 40 kilometers of the Gaza border, including Be'ersheva, will not hold classes Sunday. Altogether some 200,000 students will not be attending class Sunday.

Schools to be closed will include elementary, junior high, and high schools. Students at Ben Gurion University in Be'ersheva are advised to contact the school for information.


.... And listen to Shaul Mofaz now ( you heard what he said in 2005): isn't he ashamed of himself? How could they put this Chelmite in charge of a "Defense Committee", I ask you?

Call to Declare a 'Special Situation' in Israel's South

The powerful Knesset Foreign Affairs and Defense committee is calling for a 'special situation' in Israel's south as rockets rain down.
By Gavriel Queenann 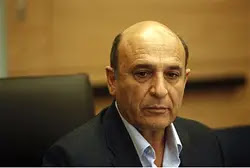 MK Shaul Mofaz
The Knesset Foreign Affairs and Defense Committee on Monday demanded the government declare a "special [security] situation" in Israel's south.
Over 200 rockets have been fired at Israel's southern communities since Friday, while IAF retaliatory raids have killed 23 in Gaza.
The committee, headed by Shaul Mofaz (Kadima), also called for an extensive review of operations by the IDF Homefront Command in light of the recent escalation.
Declaring a "special situation" would allow the government to grant to residents affected significant economic assistance designed to help them cope with the disruption of their daily lives. For instance, declaring a "state of emergency" allows parents to remain home with children whose schools are closed without a loss of income.
Mofaz told the committee "Gaza is not a nature reserve, and the terrorist leaders must not feel that safe."
MK Amir Peretz (Labor) hailed the Iron Dome system, which has intercepted 90% of the incoming rockets, but also called for an accounting of the stockpiles used to "replenish" the system.
MK Avi Dichter (Kadima) said that "since Friday the State of Israel has entered a war of attrition."
He called on the IDF to significantly increase the "rate of acquisition" and "review the deployment" of Iron Dome batteries in order to provide complete protections for Israel's southern communities.
Israel has a limited number of Iron Dome batteries at present, though orders for more are expected.
Israel's anti-rocket systems have proven highly effective, but critics say they are expensive to use and do nothing to address the underlying problem – the firing of rockets in the first place.
If Israel were to root out the terror infrastructure in Gaza and Southern Lebanon, they say, Iron Dome would be largely unnecessary.
MK Michael Ben Ari (National Union) said that the government decision not to declare a “special situation” thus far amounted to an “unfair taxation on residents in the South.”

.... And in Hebrew, listen to the great genius Yitshak Rabin - thank you, Boaz:

could not put it any better.

Lets call it like it is. As a collective we seem hopelessly affected.
Either some have been conditioned to operate using the shortest memory span ever, or something intrinsically wrong is part of our genetic make up.

AND THE SAME WILL HAPPEN regarding Iran's nuclear plans.
Israeli unJews are unfit to lead the Jewish people, unfit at all levels.
Forget about histrionics, gesticulations, theatricals of the ISRABOLF type.
They are UNFIT. NEKUDAH!