What else do you expect from the UN and its many tentacles?? Can you quote one good thing about that despicable organization?

UNRWA tweets in support of terrorist, then deletes it Flash 90
UNRWA, the UN agency for “Palestinian refugees”, on Monday posted a tweet glorifying a Palestinian Arab terrorist, then deleted the tweet, blaming what it alleged was "brief, unauthorized access" to its Twitter account.
The controversial tweet was documented by the Geneva-based watchdog UN Watch.
UNRWA's tweet had glorified Ghassan Kanafani as a "famed" Palestinian writer, when in fact he was spokesman and right-hand man to the leader of the Popular Front for the Liberation of Palestine (PFLP) terrorist group, when it orchestrated the Lod Airport Massacre in 1972, in which 26 were killed and 80 injured.
UNRWA’s tweet echoed complaints by Arab Israelis after a recent memorial to the terrorist was ordered removed in the Israeli city of Acre.
“There has been a brief, unauthorized access to UNRWA’s twitter account,” the agency later tweeted. "Measures are in place to prevent a reoccurrence. UNRWA is in the process of changing the password for its twitter account.”
Hillel Neuer, executive director of UN Watch, posted a screenshot of the deleted UNRWA tweet.
“UNRWA backs Ghassan Kanafani, spokesman of PFLP terror group when it perpetrated 1972 Lod Airport Massacre, killing 26—17 Christian pilgrims from Puerto Rico, a Canadian citizen and 8 Israelis—and injuring 80. Why do EU, UK, Germany & Canada fund UNRWA?” he wrote. 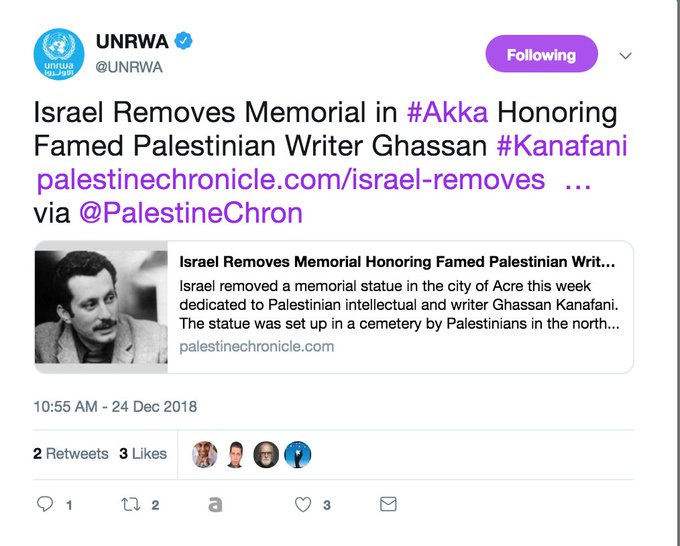 152 אנשים מדברים על זה
מידע ופרטיות בנוגע למודעות טוויטר
“I hope that UNRWA’s removal of its shameful tweet indicates its recognition that it is inappropriate for a supposed UN humanitarian agency to be pronouncing itself on political controversies, let alone celebrating a terrorist involved in mass murder,” Neuer said in a statement.
“UNRWA receives massive financial and political support from Britain, Germany, Sweden, the EU and Canada, and they each bear responsibility; it’s time for those governments to demand basic accountability,” he added.
“We remind UNRWA that support for terrorism constitutes a gross violation of the UN Charter as well as UNRWA’s own internal policies concerning neutrality and impartiality, including with respect to public pronouncements.”
“I’m concerned that today's tweet reflects systemic radicalism within UNRWA that adversely reflects on the agency's integrity, independence and impartiality.”
“As we have documented in numerous reports, UNRWA has a pattern and practice of employing teachers who glorify Jihadist antisemitism and anti-Israel terrorism, amounting to a gross violation of its duty of neutrality. UNRWA must stop engaging in political, racial, religious or ideological controversies,” concluded Neuer.
Created in 1949, UNRWA supplies aid to more than three million of the five million people who are registered as “Palestinian refugees” in Jordan, Lebanon, Syria and territories assigned to the Palestinian Authority.
However, it is also notorious for its anti-Israel activities. During the 2014 counterterrorism Operation Protective Edge, Hamas rockets were discovered inside a school building run by UNRWA.
Likewise, a booby-trapped UNRWA clinic was detonated, killing three IDF soldiers. Aside from the massive amounts of explosives hidden in the walls of the clinic, it was revealed that it stood on top of dozens of terror tunnels, showing how UNRWA is closely embedded with Hamas.
In a more recent incident, the director of UNRWA operations in Gaza expressed his supportfor the anti-Israel marches along the Israel-Gaza border and pledged that the organization’s medical centers will provide care for “Palestinian refugees” who might sustain injuries during them.
The US announced several months ago that it would be cutting its funding to the controversial UN agency. However, since that time UNRWA has received pledges of $100 million in additional funding from countries including Qatar, Canada, Switzerland, Turkey, New Zealand, Norway, Korea, Mexico, Slovakia, India and France as a means of making up for the aid that was cut by Washington.
Just last week, the European Union announced it would commit a further 20 million euros ($23 million) to the agency.

https://www.gatestoneinstitute.org/3979/unrwa-dilemma?utm_source=phplist445&utm_medium=email&utm_content=HTML&utm_campaign=UNRWA+is+anti-Semitic+Hypocrisy+%2A+Self-Hating+Jews+Support+BDS+%2A+Leasing+Sinai+is+Another+Peace+Option
Posted by DS at 1:27 PM