No kidding! "Some would argue that this situation applies to other countries as well"? Hello, Israel of judicial tyranny!!! 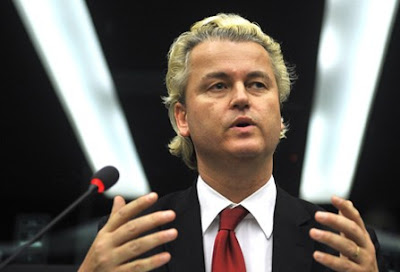 Wilders Acquittal May Signal the Turn of the Tide

Sivan 21, 5771, 23 June 11 02:28
by Amiel Ungar
(Israelnationalnews.com) The acquittal of the embattled Dutch politician Geert Wilders may mark the turn of the tide in terms of European permissiveness towards Islamist immigrants who would destroy Dutch culture from within.

One can say that the trial was a win-win situation for Wilders, as the prosecution itself believed that he should be acquitted and stated so. Obviously Wilders is correct in saying "an enormous burden has fallen from my shoulders." Even when one believes in one's innocence and is certain of vindication, the postion of defendant is an unpleasant one.
Wilders, however, received a good deal of compensation. First of all the trial was nationally televised, including Wilders' summation speech in which he compared himself to the Dutch martyrs and to Martin Luther's defiance of papal supremacy:
Every day the armoured cars [Wilders faces death threats from Moslems - ed.] drive me past the statue of Johan de Witt at the Hofvijver in The Hague. De Witt wrote the “Manifesto of True Freedom” and he paid for freedom with his life. Every day I go to my office through the Binnenhof where Johan van Oldenbarneveldt was beheaded after a political trial. Leaning on his stick the elderly Oldenbarneveldt addressed his last words to his people. He said: “I have acted honourably and piously as a good patriot.” Those words are also mine.
A major loser was the Dutch judiciary that overruled the prosecution and insisted that the trial proceed. The first panel of judges had to be replaced when they appeared to be tampering with witnesses in an attempt to secure a guilty verdict.
In his summation, Wilders took a devastating potshot at the political orientation of the judiciary. "Those on the Left like to tamper with the separation of powers. When they cannot win politically because the Dutch people have discerned their sinister agenda, they try to win through the courts." Some would argue that this situation applies to other countries as well.
In the verdict, the court claimed that some of Wilder's anti-immigrant remarks were crude, but they were part of a legitimate debate within Dutch society and mitigated by the fact that Wilders had no problems with immigrants who sought to integrate.
Dutch embassies and businesses in the Moslem world will probably take precautionary measures. Left-wing attorneys who first brought the charges against Wilders have pledged to bring the case to the UN Commission on Human Rights in Geneva.
As Syria and other countries with "stellar" human rights credentials are members of the commission, they will undoubtedly receive a sympathetic hearing.
Even before the announcement of the verdict, the Dutch government was already taking steps to compel newcomers to integrate to the point of revoking residence permits for those who fail the integration courses.
In justifying the action the government explained that without integration and an insistence on Dutch values for "the society gradually grows apart and eventually no one feels at home anymore in the Netherlands."
The Netherlands will also be emulating France in banning the Muslim Burqa and outlawing forced marriages.
Posted by DS at 3:01 PM