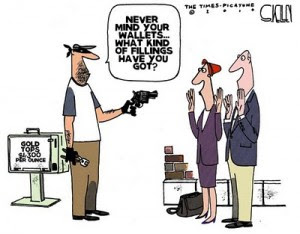 By Greg Hunter’s USAWatchdog.com
One day after the Federal Reserve announced a $600-$900 billion second round of Quantitative Easing (QE2), gold and silver hit fresh all-time highs.  Yesterday, the yellow metal surged more than $40 an ounce to well over $1,390 before falling back a few dollars in after hours trading.  Silver, also, had a monster move!  It was up more than a $1.50 per ounce.  It, too, retracted slightly in after hours trading.  That surge in precious metals is a debilitating rebuke of the Federal Reserve’s wild and unprecedented money printing policies.   How bad is it, really, for the Fed to feel this is a good idea?  Gold is acting like a predator that smells the blood of wounded prey.  In this case, the prey is a much weakened Fed that seems desperate to keep its banking cartel afloat from the undertow of a sea of red ink.
It is reported that Sprott Asset Management bought 6.5 million ounces of physical silver at nearly $26 an ounce.  Respected financial blog Jesse’s Café American wrote yesterday about the deal, “Some might consider the price that Sprott paid to be a ‘leading indicator’ of where silver will be going. I think when the paper Ponzi scheme actually collapses silver will be much higher than that. After all, “he who sells what isn’t his’n must buy it back or go to prison.” Unless, that is, they are running the game. Then they just pay a fine and admit no guilt.” (Click here to read the entire post from JCA.) This kind of silver buying is a big plus for the physical market and a big negative for the often questionable paper market.
Big-time buyers are driving over-sized price moves in precious metals.  Hedge Funds, Sovereign Wealth Funds, big banks (like Goldman and JP Morgan) and Central Banks are now moving the markets in gold and silver bullion.  Movements like the one yesterday are not mom and pop retail buyers looking to purchase a dozen Silver Eagles or a Gold Eagle coins to put into a safety deposit box.
Record high gold prices caused by the Fed printing press are not lost on Republican Congressman Ron Paul.  He is the Federal Reserve’s most adamant critic and is now on the winning side of mid-term elections. A bill that would have forced a Fed audit (HR1207) failed in a House of Representatives controlled by Democrats earlier this year.  Now, with Republicans taking control, Congressman Paul will gain some real power to, once again, probe into secret Fed policy.  Yesterday, Reuters reported, “Paul is currently the top Republican on the House of Representatives subcommittee that oversees domestic monetary policy, and is likely to head the panel when Republicans take control of the chamber in January. . . ‘It’s an outrage, what is happening, and the Congress more or less has not said much about it . . . Eventually we’re going to have monetary reform. I do not believe the dollar can be the reserve standard of the world,’ said Paul, who has called for returning the United States to a currency backed by gold or silver.” (Click here for the complete Reuter’s story.)
It is not just the announcement of the second round of QE that has precious metals gushing new highs.  It is, also, the open-ended nature of the Fed’s policy that reads, “. . . will adjust the program as needed to best foster maximum employment and price stability.”  This could mean $600 billion or $6 trillion before this round of money printing has run its course.   Gold (and silver) clearly smell the blood of a wounded Federal Reserve Note that is being drained of its buying power.  I’ll close today’s post with a quote from a recent Jim Willie article from Goldenjackass.com.  While vexing about a second round of QE, Willie wrote, “The centerpiece question, when the US bond fraud is coupled with European sovereign debt distress, comes down to WHAT IS MONEY? The answer is Gold,Silver and not much of anything else.


By: Bob Chapman, The International Forecaster


The following are some snippets from the most recent issue of the International Forecaster.  For the full 26 page issue, please see subscription information below.
US MARKETS